Meet the people Who make it happen 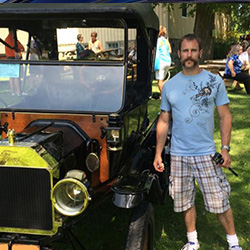 Matthew is originally from Canada’s capital, Ottawa, Ontario. Blessed with “always knowing what he wanted to do when he grow up”, his earliest memories are of working on the family car with his father Daniel Walsh. Although he didn’t play a big part in the repairs at the fresh age of 3, it did seed his love for cars, along with a desire to understand and master all the intricate workings of the modern automobile. With a family background in academia & skilled trades (Matthew’s father has a degree in electrical engineering & worked in that field for almost 10 years before going back to Law school & becoming a lawyer. Matthew’s grandfather, Leo Walsh, was an accomplished machinist after WWII, being part of a team that designed & made an electro mechanical arm in the 1960’s) Matthew excelled in mathematics and all technical teachings. He started his auto mechanics apprenticeship at the age of 19 through a FORD dealership, graduating college with honors, and exhausting FORD’s in house training program, he wrote his mechanics license exam the moment his apprentice hours were complete in the summer of 1998. He received the highest level bestowed on a licensed automotive service technician in Ontario at that time with the Interprovincial seal, allowing his license to be valid all across Canada. Matthew continued with the dealer for a couple years before moving to an independent garage. With over 20 years of experience on the bench, Matthew’s self-education has been consistent as his thirst for knowledge had him taking courses & researching automotive engineering along the way. Obsessed with personal growth & striving for greatness, Matthew is the driving force behind Stylish Getaway Cars yet he’s quick to recognize none of this was possible without his partners Eric Miller & Todd Alldread. 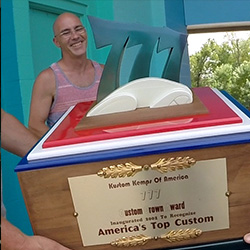 Todd’s automotive obsession started as a young boy collecting Hot Wheels cars. He figured out the best way to learn was to take action and start working on cars himself. For almost 30 years Todd has been redefining cool by building “one of” custom car creations out of rusted derelict cars, long since laid to rest in various fields across North America. One of his many creations before Ice Queen is the famed Slice n’ Dice.  Amidst Todd’s deteriorating family life in 2003, the concept of Ice Queen was born, he coined Ice Queen as being a “Bad Idea”.  With help from Eric Miller & Matthew Walsh, Ice Queen was made driveable & Todd took her to the United States in 2008 for a fresh start. Todd has spent the last several years expanding his skill set to include complete interior & upholstery fabrication with fine leather & cloth, all the while refining his metal fabrication & design skills.  Another unique trait about Todd is he’s one of the few custom car builders who can take a project from its conception & design roots, through complete fabrication, then all the way into the paint booth. He’s always painted his own cars. Todd’s seemingly endless amount of practical experience & fabrication know how serves him as a cherished advisor to, and part of the foundation of Stylish Getaway Cars. 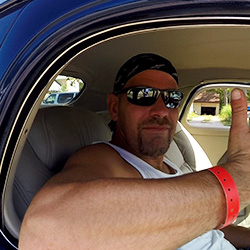 Eric was born and raised in the town of Markham Ontario. Eric has been active in the car world since the age of 2 when he started helping his Dad, Finn Miller, build and modify a 1931 Ford Model “A”. During this 14 year part time build, Eric became very active in the Radio Controlled world, primarily focusing on building & stunt flying award winning model air planes. His innate attention to detail, extreme patience and continual strive for perfection served him well as he constructed award winning Volkswagens in his late teens & early twenties. During these years Eric’s passion for cars was also his daily career of choice, working at independent performance shops and a Volkswagen dealership. Eric’s creative skills and entrepreneurial business sense served him well as he owned and operated “Miller Precision” an independent contracting company he ran with his wife for many years. During this time he also did some custom paint work for HGTV’s Colin & Justin’s Home Heist & The Unsellables. After years of heavy lifting, using a jack hammer & the intense physical labour involved with such a venture, Eric succumb to a back injury that forced him out of that profession.  This unfortunate turn of events did lead Eric back towards the automotive world as a career (cars had always remained a passionate hobby) with his introduction to now legendary hot rod & custom car builder Todd Alldread, in the town of Pefferlaw Ontario back in 2005.